This January the Montgomery Bell Academy will host the 28th Southern Bell Forum at their campus in Nashville, Tennessee. Since its inception in 1983, the SBF has been considered one of the most prestigious invitational policy debate tournaments in the country. Featuring some of the most intense competition of the year, the Forum limits its field to 72 entries and invites each school to register only its top team.

For those debaters and coaches that will be attending this year’s tournament, rigorous preparation should be well underway. Alas, this post will not assist you in that regard. Instead, the following is an attempt to chronicle some of the rich history of the Southern Bell Forum so that current attendees can better appreciate the legacy of this unique event.

END_OF_DOCUMENT_TOKEN_TO_BE_REPLACED

A few issues I’ve come across in judging multiple debates this year, so no one should feel particularly targeted by any remarks… unless I judged you.

END_OF_DOCUMENT_TOKEN_TO_BE_REPLACED

Writing taglines for evidence can be tricky.  There is no one exact right tagline for every card so it is helpful to remember some basic guidelines:

Efficiency –
Write taglines without flowery language and cliches.
Avoid unnecessary adverbs or adjectives, e.g., completely, totally, probably, somewhat.
Substitute commas or dashes for conjunctions like “because” or “due to”
Do NOT write “in order to” instead of just writing “to.”

Accuracy –
Re-read evidence before tagging it in a file – make sure it accurately reflects the author’s
conclusion or argument.
Do NOT overstate your evidence, e.g., say the impact is extinction when the card does not say
that.
Consider the strategy of using evidence, but do NOT manipulate words in the evidence to make
argument that is not supported by the author.
Make sure the relationship you are expressing in the tagline is actually said in the evidence, e.g.,
an author saying that “global warming causes sea level rise” cannot be changed to “sea level
rise causes global warming.”   Debaters have a tendency to look for evidence that has key
words and overlook the relationship the author makes between those key words. Double check
your thinking and do NOT get overly excited because you found a card with key words.

Examples –
This section could have been called “Warrants,” but that did not sound as good.  Examples are
the data in the evidence that proves your overall argument in the tagline true.  These are the
parts that you will need to highlight in a comparative warrant debate.  As a result, include these
in your taglines, e.g., “Political capital high now – State of the Union address.  This example
shows how someone can include quick examples in a tagline to distinguish your evidence from an
opponent’s.

There is an activity that is attached for some practice writing taglines.

Below I have posted a card I saw read in a debate as an answer to deontology. I don’t want to taint discussion so I won’t say what I thought about it yet, but I am interested to see what other people might think in terms of is this a good card, is the argument it makes useful/relevant to morality issues as they are debated in policy (death vs some other value) , and what you would rate it sort of 1-10, 10 being Khalilzad 95.

END_OF_DOCUMENT_TOKEN_TO_BE_REPLACED

The Woodward Academy debate team—coached by The 3NR’s Roy Levkovitz—was the subject of a feature story in Monday’s Atlanta Journal-Constitution. Along with “Coach L”, seniors Matthew Pesce and Max Plithides are profiled. Congratulations to Woodward for this impressive publicity. 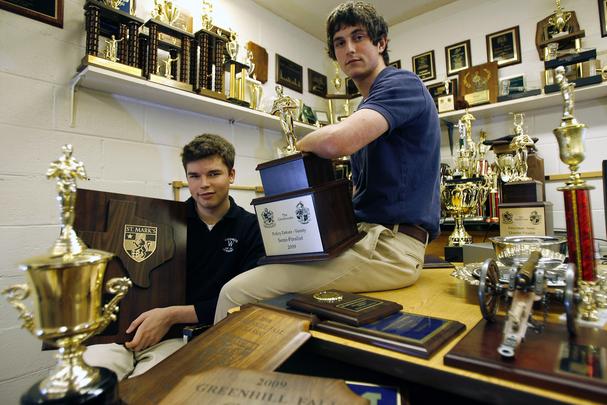 Many of you have probably read or debated evidence from Tallis 97 on reason/rationality- he has a new article that is pretty interesting you can find here.

I got an email from a former labbie the jist of which is they lost a debate on war is less bad then X other consequence. In my response I opened the trusty impact file to copy and paste a war bad impact card and saw that I did not have one in there.

So the challenge is- who can find the best “war bad” card? Basically everyone has silly nuclear war–> extinction cards, so exclude those from this contest. So a good card would either just describe the horrors of war, or explain why war is the root cause of several other possible impacts etc.

Here is how this will work

-you can enter 1 card

-I will post a card Tuesday evening, at which point if anyone has cut a card that Roy judges to be better than the card I have cut they win a prize to be negotiated.