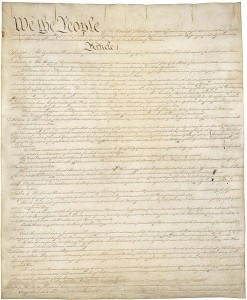 Article I, Section 6: “The Senators and Representatives […] shall in all cases, except treason, felony and breach of the peace, be privileged from arrest during their attendance at the session of their respective Houses, and in going to and returning from the same; and for any speech or debate in either House, they shall not be questioned in any other place.”

Segal announced plans for the NDCC alumni networking working group to lead an effort aiming to establish a “Speech and Debate Caucus” in the U.S. Congress, beginning first with surveys of members, proceeding to formal enactment of the caucus. This represents an exciting development for American academic debate communities, something that would give us a formal political presence in the nation’s leading deliberative body. What exactly might this mean? Segal hinted at the possibility that a Speech and Debate Caucus would be positioned to advocate for Urban Debate League funding, and press to restore the federal government research assistance program, where in previous years the Government Printing Office would publish a detailed sourcebook on that year’s high school and college debate topics.

But this could be just the tip of the iceberg. Segal also referenced an important U.S. Supreme Court case, Gravel v. United States (408 U.S. 606, 1972). Here, the Court broadened the scope of the Speech or Debate Clause by extending its coverage to legislative aides (not just members of Congress):

PROCEDURAL POSTURE: Defendant senator filed motions to quash subpoenas in a grand jury criminal investigation, asserting that requiring witnesses to testify violated his privilege under the Speech or Debate Clause, U.S. Const. art. I, ß 6, cl. 1. The United States Court of Appeals for the First District affirmed the district court’s denial of the motions but modified the protective order. Plaintiff United States appealed.

OVERVIEW: The U.S. petitioned for certiorari challenging the ruling that aides and other persons could not be questioned with respect to legislative acts and that an aide to a member of Congress had a common-law privilege not to testify before a grand jury with respect to private publication of materials introduced into a subcommittee record. The senator also petitioned for certiorari seeking reversal of the court of appeals’ decision insofar as it held private publication unprotected by the Speech or Debate Clause and asserting that the protective order of the court of appeals too narrowly protected against inquiries that a grand jury could direct to third parties. The Court held that the Speech or Debate Clause applied not only to a member but also to his aides insofar as the conduct of the latter was a protected legislative act if performed by the member himself, but did not protect illegal conduct. The Court noted that the courts had extended the privilege to matters beyond pure speech or debate in either house, but only when necessary to prevent indirect impairment of such deliberations. The Court vacated the court of appeals’ judgment and remanded the case for further proceedings.

Consider some implications of the “indirect impairment” doctrine established here. Does this doctrine mean that any person or organization taking actions that indirectly impair speech or debate in the U.S. Congress are potentially violating the U.S. Constitution? How far would this extend? What forms of injunctive relief might be available? Such questions are certainly ripe for research and reflection. While these are fascinating abstract issues, a more concrete aspect of the issue involves a resolution adopted later in the day at the NDDC conference:

The NDDC endorses the establishment of a U.S. Congressional Speech and Debate caucus and encourages that caucus to foster debate research and scholarship, including the publication of a CRS topic area packet, and support of a participatory design process oriented toward refinement and development of an open source digital debate archive.

This resolution reflects NDDC conferees’ sense that a digital debate archive (facilitating a transition to paperless debate and generation of “authority 3.0” metrics) should be built with open source code, using a participatory design process. These objectives may conflict with other plans soon to be unveiled, as rumors circulated during the NDDC conference that a commercial entity may be on the brink of releasing proprietary software designed to deliver archive functionality to academic debate communities. It is likely that such a commercial venture would feature “Big Design Up Front” development, conforming to the “Waterfall model” of software engineering.

It is perhaps even the case that patent protections held by the corporation commercially marketing digital debate archive software could establish a legal basis for exclusivity, potentially blocking development of the participatory design process called for in the NDCC resolution. To date, commercial debate ventures utilizing electronic archiving (e.g. Planet Debate, Evazon) have not advanced aggressive exclusivity claims to quash open source efforts that might infringe on its patents. But this day may be coming soon, especially if a new profit-driven commercial entity enters the playing field. Members of the academic debate community would do well to start deliberations regarding this contingency, which would likely shape the trajectory of speech and debate in contexts far beyond the U.S. Congress for years to come.